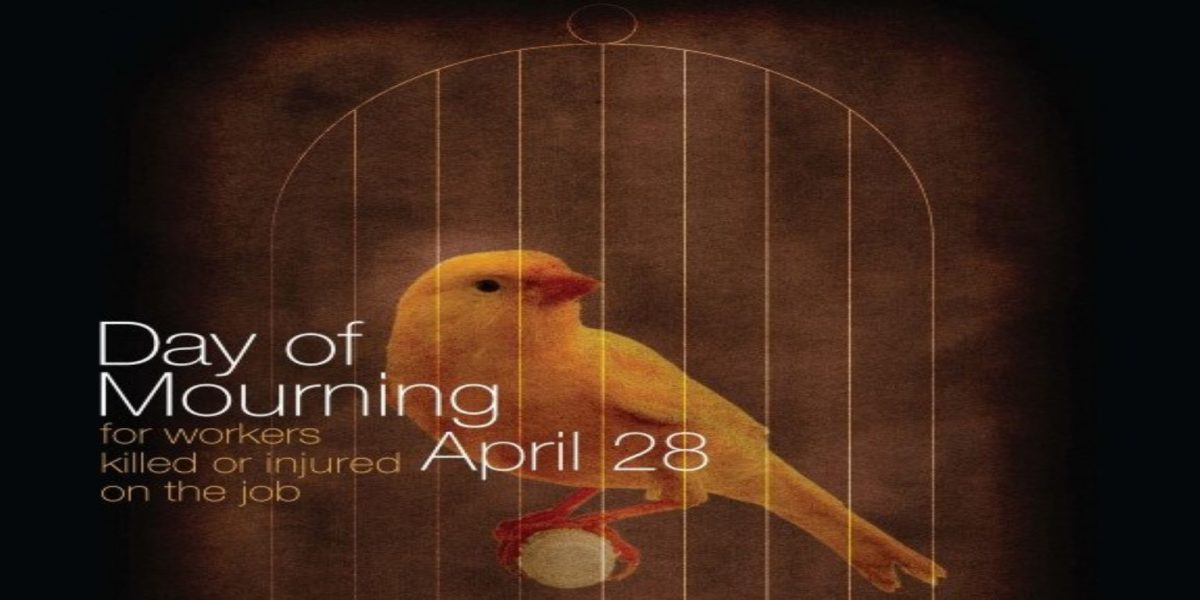 On April 28, please take the time to honour and recognize the workers injured or killed in Canadian workplaces.

Below is an excerpt from Wikipedia, that outlines the history and significance of this very important day.

The National Day of Mourning, or Workers’ Mourning Day is observed in Canada on 28 April. It commemorates workers who have been killed, injured or suffered illness due to workplace related hazards and occupational exposures.

Workers’ Memorial Day was started when two labour activists, Colin Lambert and Dr. Ray Sentes, were driving in early April 1983 to a union meeting, and were stopped by a funeral procession for a firefighter that had been killed in the line of duty.[1] They worried that other workers who died because of work did not receive similar honours, and recalled how members of the United Steelworkers in Elliott Lake held each year a “Workers’ Remembrance Day” for uranium miners who had succumbed to exposures. Lambert and Sentes sought endorsements from union officials for the idea to hold a national day of mourning, and the Canadian Union of Public Employees (CUPE) passed a resolution to that effect at its annual convention in 1983, and the Canadian Labour Congress followed suit at its annual convention the following year. The AFL-CIO declared a day of mourning in 1989 and a “workers’ Memorial Day” is observed in over 100 countries.

In December 1990, this day became a national observance in Canada with the passing of the Workers Mourning Day Act, so that on April 28, 1991, it was officially the National Day of Mourning for persons killed or injured in the workplace; making April 28, an official Workers’ Mourning Day.[2][3]

Injuries and deaths in the workplace continue to be a matter of important concern across Canada. Many Canadians members work hard each day in an effort to minimize accidents and incidents. Risk is an inherent element of many jobs, and this is why safety should be one of the core values in any workplace. Since its inception, the observance has spread to over 80 countries around the world, but is known is most other countries as the Workers’ Memorial Day. The date 28 April was picked because on that day in 1914, the Workers Compensation Act received its third reading. In 2001 the International Labour Organization first observed World Day for Safety and Health at Work on this day. Commemorating those who have been hurt or killed in the workplace shows respect for the fallen, while serving as a reminder of the importance of occupational health and safety.

The Canadian flag is flown at half-mast from sunrise to sunset on all federal government buildings, including on Parliament Hill. Workers and employees observe this day in various ways including lighting candles, donning ribbons and black armbands, and observing a moment of silence at 1100 hrs. The purpose of Day of Mourning is twofold- to remember and honour those lives lost or injured and to renew the commitment to improving health and safety in the workplace – to prevent further deaths, injuries and diseases from work.